State Change is a manifesto, a serious plan, and a fantasy novel – self-published by Joe Andrade, a former candidate for US Congress and a retired professor of engineering. The book was made available, for free, on line in April 2016, before the conventions and before Trump was nominated as the Republican candidate for President. State Change has not and will not be updated or modified. Most of its 29 ideologue ‘patients’ are still in office or otherwise active and in continued need of treatment. The harmless team has been disbanded. Joe continues his activities at  www.joeandrade.org.

The deterioration is due to the growth and actions of Humanity. Humanity itself is now in peril.

The State must change.

National and World leaders are trapped in a set of assumptions which exacerbate the very problems which must be solved.

Replacing those leaders and rulers is insufficient – the replacements will be afflicted by the same historic assumptions.

The most effective, most pragmatic, most realistic solution is to directly change the mindsets of existent afflicted rulers and elected leaders.

Given the urgency of the problems which must be solved, those entrenched mindsets can only be changed by direct chemical means –

by chemically-facilitated revelations and epiphanies.

That is the subject of this book.   Please read and distribute it. 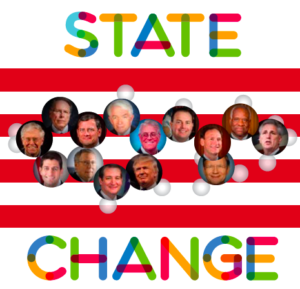